T he Irish question was one of the most important issues that confronted Menzies during his time in Britain. Prime Minister Eamon de Valera was determined to keep the Republic of Eire out of the War and this neutrality included denying Britain access to the ‘Treaty Ports’ – five harbours and fuel storage areas originally retained under British control in the Treaty of 1921, which had granted independence to Eire. In 1938 de Valera successfully negotiated their return with Chamberlain’s British Government.

During 1940, after the fall of France, it seemed that a German invasion of Britain might only be hours away. Shipping losses in the Atlantic were enormous: between July and October 1940, 245 vessels were sunk in the Atlantic by German U-boats. The use of the Irish Treaty Ports 1 for anti-submarine operations in the Atlantic would have provided convoys with better protection. By March 1941 British restrictions on trade and shipping to Ireland had reduced the petrol allowance to private motorists by 75%, brought tea rationing and the end of wheat imports and had cut off external supplies of oil, fat and sugar.

Against this background, Menzies announced in a meeting of War Cabinet that he was preparing to travel to Dublin to meet de Valera to discuss the situation. Menzies prepared a detailed paper on his meeting and presented it to the War Cabinet on 10 April. Although well received by some in Cabinet, Churchill decided that nothing would be gained by inviting de Valera to London for talks: Menzies’ plan had been rebuffed. Thereafter, Menzies’ relationship with Churchill deteriorated. Although an important part of the trip, there are few diary entries dealing with de Valera and the Irish question.

Menzies left for America on 3 May for meetings with Roosevelt to discuss the position of the United States—not yet in the war, but already an important source of assistance for Britain. 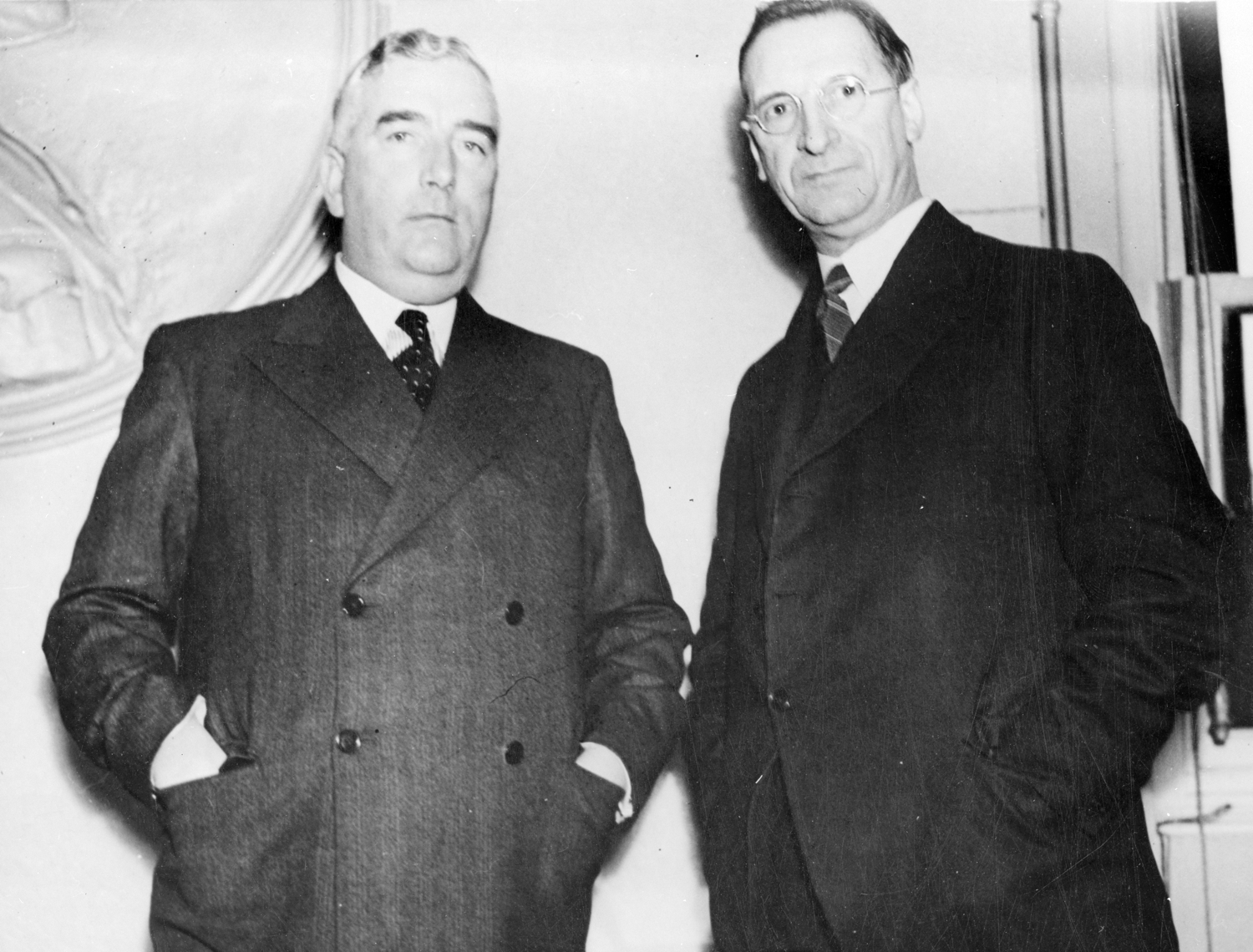 Very free talk about Southern Ireland. All present are plainly anti-R.C. Bevin convinced that some Federal Scheme the only way out (probably right!) and that now is the time for a commission from the dominions, chaired by U.S.A to offer to settle the matter!

(Winston) Enjoys hatred, and got a good deal of simple pleasure out of saying what he thought of de Valera, who is (inter alia) a murderer and perjurer. (N.B. There is a growing passion on this subject here, and we may as well get ready for squalls. After all, why should the British people, (and the Australian) be prejudiced and perhaps defeated by this fantastic Southern Irish neutrality?)

I endeavoured vainly to get his (Winston Churchill’s) mind on the question of the ultimate solution of Ireland. War? Federal Union? Should the Dominions offer to intervene? 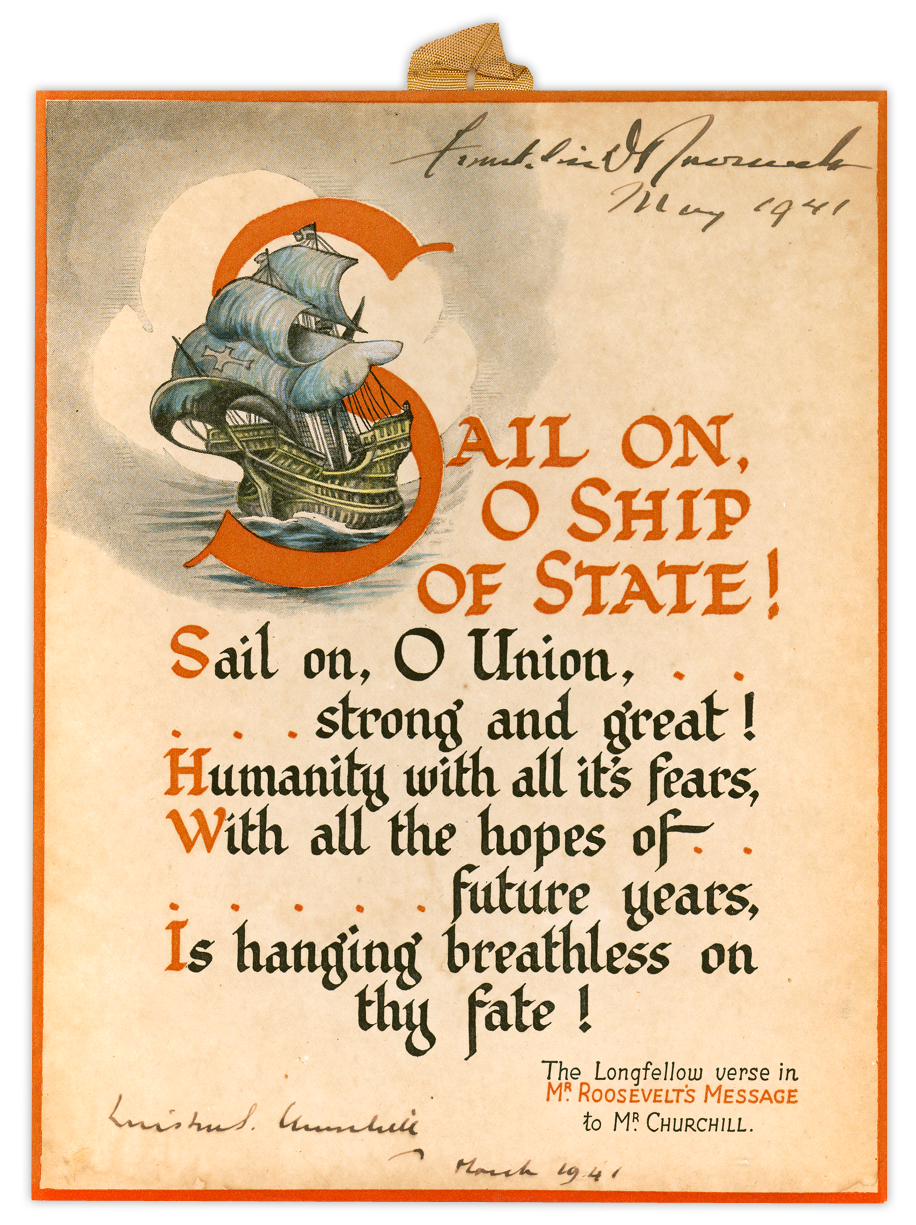 The Longfellow broadsheet of 1941 foretold Winston Churchill and President Franklin Roosevelt’s dramatic secret meeting off the coast of Newfoundland. Roosevelt used the verse as a hastily scribbled message of support to Churchill in early 1941, when American entry into the war seemed remote. Churchill had it printed, and both he and Roosevelt signed a few copies on the last day of their meeting in August 1941.

Menzies collected Roosevelt’s signature earlier, on his journey back to Australia. At their meeting Churchill and Roosevelt drafted the Atlantic Charter, the agreement on war aims which was to be the basis of the enduring Anglo-American alliance. Only four other signed copies are known to exist.

He and all his ministers have “done time” as rebels, and family blood has been spilt in the streets. We must remember this—“You have not died on the Barricades”!

War Cabinet re Ireland. Winston describes my paper 2 as “very readable”—a most damning comment. Beaverbrook, Sinclair & Greenwood rather approve, but Winston & Kingsley Wood exhibit the blank wall of conservatism. There is triangular prejudice on this matter. Winston is not a receptive or reasoning animal. But they will come to it!

Winston describes my paper as “very readable”—a most damning comment.

General American sentiment is on our side, but the moral arguments of cowardice and short-range self-interest are being directed by Hoover, Wheeler, Lindbergh & Co 3 to the mothers and possible draftees! The slogan “help Britain” is most imperfect—should be “help ourselves”. That has been my own theme—“This is your struggle as well as ours, and you must organise your material resources accordingly”.

Roosevelt agreed that we all ought to tell Japan where she gets off, but stops short of actually instructing the USA Ambassador to do so. I am left in no doubt (without words) that America will not stand by & see Australia attacked. I plead for reality about N.E.I. and Singapore.

Don’t think Pacific will be denuded of USA naval forces. R. is a little jealous of Winston’s place in the centre of the picture. I tell him they should have a meeting. R. is not an organiser—very like Winston—and co-ordination of effort is not conspicuous.

Roosevelt agreed that we all ought to tell Japan where she gets off, but stops short of actually instructing the USA Ambassador to do so.