W ith war threatening in the Pacific, Menzies travelled to Britain in 1941 to protest at the fragile state of British defences at Singapore and to discuss trade, munitions and aircraft production with British industrial firms.

Menzies flew into England on 20 February, following 10 days in the Middle East. He was to spend ten weeks here, meeting with the heads of industrial firms, delivering speeches, attending official engagements, enjoying weekends at Chequers, Winston Churchill’s official country retreat and, most importantly, attending meetings of the British War Cabinet. Menzies’ visit coincided with Britain’s decision to help Greece resist Nazi aggression, and at his first War Cabinet meeting the decision was made to send troops—mostly Australian—to Greece.

Prime Minister Menzies with Winston Churchill and the US Ambassador in London, John Gilbert Winant. Photographed here in their robes after the ceremony of presenting degrees to Winant and Menzies.

Winston is completely certain of America’s full help, of her participation in a Japanese war, and of Roosevelt’s passionate determination to stamp out the Nazi menace from the earth. Is he right? I cannot say. If the P.M. were a better listener and less disposed to dispense with all expert or local opinion, I might feel a little easier about it. But there’s no doubt about it; he’s a holy terror—I went to bed tired!

At 5 pm attend War Cabinet; Procedure interesting. Winston–plus cigar says “First Sea Lord”, and Pound speaks regarding losses & events–very clearly & crisply. A few questions, chiefly by P.M. Same with others. Then Greek affair called on. “You have read your file, gentlemen, report of the Chiefs of Staff C’tee. The arguments are clear on each side. I favour the project”. And then around the table. Nobody more than three or four sentences. Does this denote great clarity and directness of mind in all these Ministers, or has Winston taken charge of them, as the one man whom the public regard as indispensable! There may be a good deal in this business of building yourself up with the public by base arts so that you can really control a Cabinet.

People. Tentative Estimate.
Herbert Morrison–Yes.
Cranborne–Courtesy has ousted fibre.
Anderson will not cross Churchill.
Alexander disagrees in silence and tells you privately next day.
Beaverbrook has a mind of his own, though I suspect it is not a good mind.
Sinclair (Air) light as air.
Greenwood present, & hopes to be correct.
Attlee should be a Sunday School Superintendent.
Atmosphere—marvellous people at creating it—I was the only one to put questions, and feel like a new boy who, in the first week of school, commits the solecism of speaking to the captain of the School.

Beaverbrook has a mind of his own, though I suspect it is not a good mind.

Churchill grows on me. He has an astonishing grasp of detail and, by daily contact with the service headquarters, knows of disposition and establishment quite accurately. But I still fear that (though experience of Supreme Office has clearly improved and steadied him) his real tyrant is the glittering phrase–so attractive to his mind that awkward facts may have to give way.

But this is the defect of his quality. Reasoning to a predetermined conclusion is mere advocacy; but it becomes something much better when the conclusion is that you are going to win a war, and that you’re damned if anything will stand in your way. Churchill’s course is set. There is no defeat in his heart.

At lunch, speak to the Foreign Press Association, which produced a record attendance for the occasion. Subject—The Pacific—a sticky topic, but on a plea for frankness I get by. Policy vis à vis Japan is not appeasement in the sense of offering sops to Cerberus, but a proper blend of friendliness & a plain statement that we can and will defend ourselves and our vital interests.

War Cabinet with P.M. absent (a heavy cold) very like cold soup. I must discover the secret of having my cabinet unwilling to decide any important question in my absence.

Policy vis à vis Japan is not appeasement...but a proper blend of friendliness & a plain statement that we can and will defend ourselves... 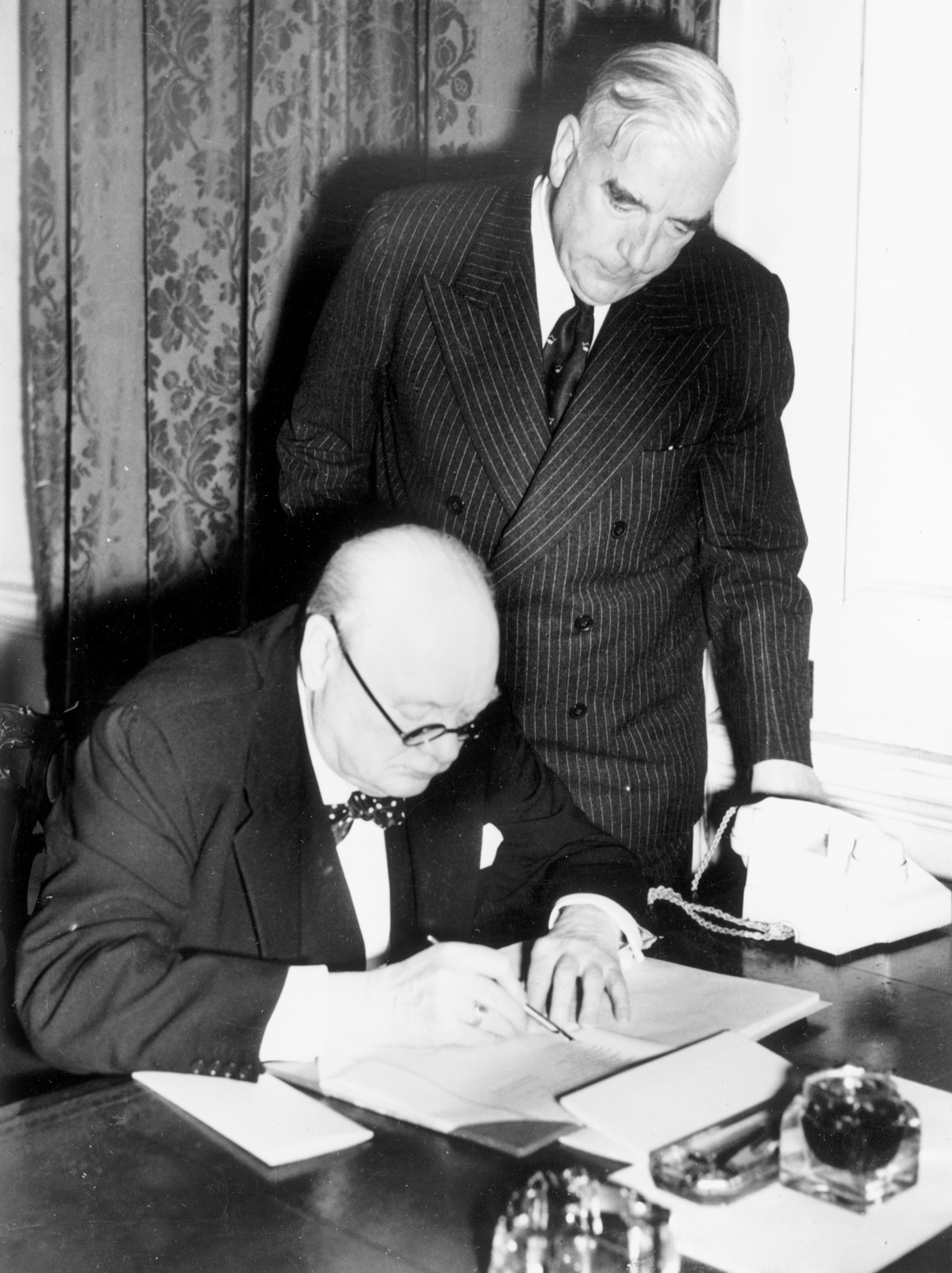 Menzies with Winston Churchill at No. 10 Downing Street, London.

War Cabinet—Winston present. More notes on procedure. P.M. commences with a short but impressive statement on war position. Refers to “battle of the Atlantic”. “I expect results, gentlemen”. Then a brief expression of faith. Very simple but effective. Discussion very brief. Get through 3 times the work we do. Chiefs of staff do confer. So do Service Ministers. P.M. has direct contact. Individual ministers primarily concerned with own departments...N.B. What a versatile genius Winston is. At No 10 Annexe his secretary shows me a series of oil paintings by Winston—one or two really brilliant!!

Away to Chequers again—others present—de Gaulle, Gen Spiers, liaison with French forces for many years—Duncan Sandys. Latter is whole-hogger (hang Hitler and wipe out 40 millions of Germans) but certainly stands up to Winston. But Winston has a superb answer—

And again, in that manner he has of dredging up modern saws and ancient instances, he reminds us of the Greek story of the conquered who were spared—these men were spared, not because they were men, but because of the nature of man”.

Roosevelt was recently asked about the terms of peace. Wiser man than Woodrow Wilson, he replied–“Peace terms? But the Nazis have not yet been defeated!” there can this time be none of this cant of “peace without victory” because without victory there can never be peace again in my time.

...to House of Commons where I address EPA on Australia’s War Effort. In form, and a remarkable ovation at the finish. Amery in the chair. Lord Denman looking old fashioned but fit, in the audience. Also Huntingfield. Some of these fellows would not mind my defeat at Canberra if they could get me into the Commons. OMNIS IGNOTUS PRO MAGNIFICO. 1

Some of these fellows would not mind my defeat at Canberra if they could get me into the Commons.

…to Defence Committee to discuss “what next” if Egypt falls. The answer is a lemon i.e. Winston says “Let us keep our minds on victory”. I argue a great deal and nobody else says anything!

At War Cabinet, W.C. speaks at length as the Master-Strategist—“Tobruk must be held as a bridge-head or rally post, from which to hit the enemy”. “With what?” says I, and so the discussion goes on. Wavell and the Admiralty have failed us. The Cabinet is deplorable—dumb men most of whom disagree with Winston but none of whom dare to say so. This state of affairs is most dangerous. The Chiefs of Staff are without exception Yes Men, and a politician runs the services. Winston is a dictator; he cannot be overruled, and his colleagues fear him. The people have set him up as something little less than God, and his power is therefore terrific.

Today I decide to remain for a couple of weeks, for grave decisions will have to be taken about M.E. (Middle East), chiefly Australian forces, and I am not content to have them solved by “unilateral rhetoric”. 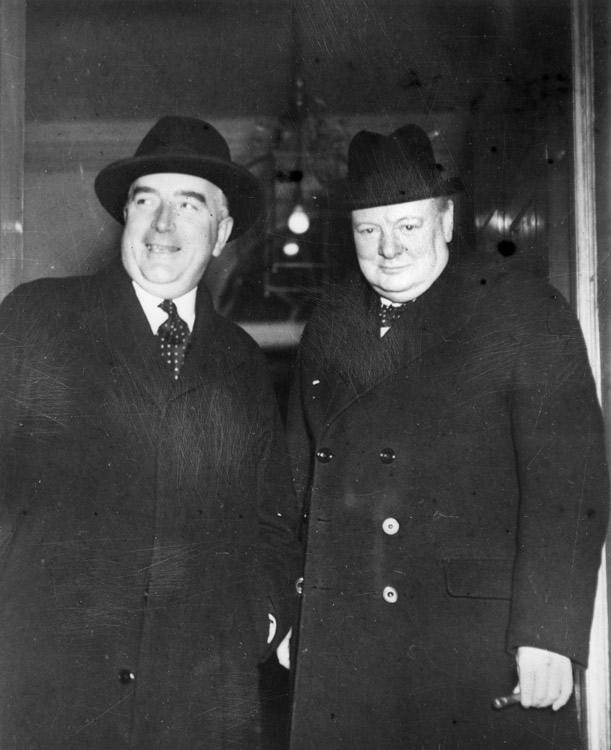 Menzies with Winston Churchill at No. 10 Downing Street, London.

Clearing up. Whenever we leave, we leave in a hurry. Queer trait in human nature! Great argument in War Cabinet. I protest against W.C. deciding what advice to offer USA regarding moving Pacific fleet (or a real section of it) to the Atlantic, without reference to Australia, though I was in London!

I was too late after flying to Swansea via Cardiff, to receive the freedom of Swansea. Last night Cardiff visited by land mines and I see the smoking results! Picturesque but in some ways horrible day.