T hroughout the 42,000 miles of travel in 4 months, countless conferences with officials at all stopping places, War Cabinet meetings and weekends at Chequers, Menzies met and encountered many people. The tiring nature of the work didn’t effect his ability to form clear impressions of people he met and observed in action and the Diary contains many interesting and cutting pen portraits. 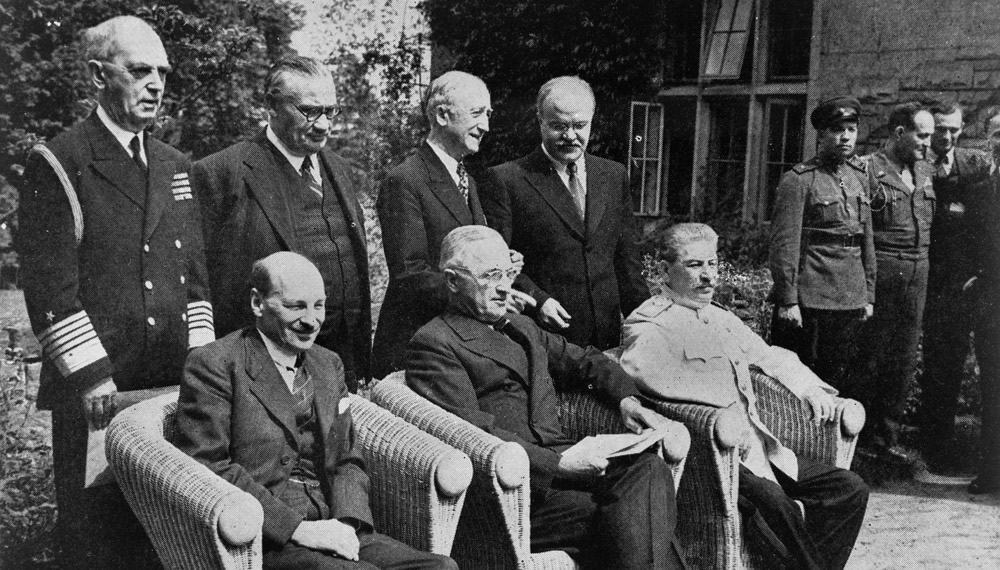 ...the interesting material at Singapore was human—and disturbing.

The governor, Sir Shenton Thomas 1, is compact, brisk and I should think efficient. Talks with precision and emphasis, instead of the usual vague phrases “d’you see what I mean” of the tropical service Englishman. His wife is small and intelligent, except that she races horses and sometimes wins.

The new C in C. of the Far East, Air Chief Marshall Sir Robert Brooke-Popham 2, looks like the late Baden-Powell. 3 He has borne the white man’s burden in many places from Kenya to Canada, and it has left his shoulders a little stooped. His hair and moustache are both sandy and wispy and a little indeterminate. He received us at the landing stage, wearing a pith helmet, a “bush shirt” of khaki, the tail outside the trousers in the manner of a tunic, & shorts. So complete a type was he that I had much ado not to say “Dr Livingstone, I presume”. His voice is thin and high pitched, but, after a while, not unpleasant. His attitude throughout our talks was courteous and benevolent, he is a first class listener, but he left me with a vague feeling that his instincts favour some heroic but futile Rorke’s Drift rather than clear-cut planning, realism and science.

Winston Churchill had lunched him in London before he came out to this appointment, and he was boyishly pleased that Winston’s farewell exhortations to him had contained more than a hint of the forlorn hope (“Hold out to the last, my boy, God bless you. If your grandfather had not broken his neck playing polo at Poona he would be proud of you this day!”).

General Bond 4 commands the army, presumably. Tall, well-groomed, and with that form of mental hiccups which reduces conversation to a series of unrelated ejaculations. One eye is closed, the other droops behind a monocle. If there is action, the General will no doubt die gallantly, but too many of his men will die with him.

Hold out to the last, my boy, God bless you. If your grandfather had not broken his neck playing polo at Poona he would be proud of you this day! 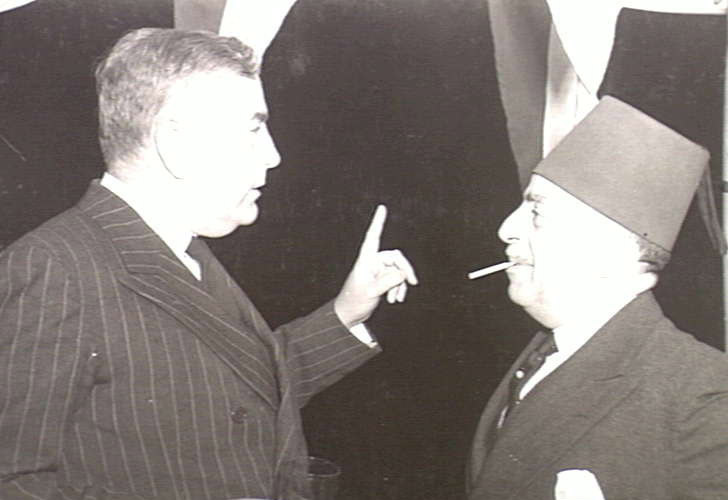 Prime Minister Menzies emphasises a point in a discussion with the Prime Minister of Egypt, Hassein Sirry Pasha at a reception in Cairo.

Drive to Jerusalem with Sir Harold McMichael. 5 Amidst talk of the classics, philology and poetry (and incidentally the laws of economics, the existence of which McMichael wisely decries) we pass through lovely green and sacred country—Caria of Galilee, Nazareth—a fairly large town—Carmel, Samaria to Jerusalem. Surprising greenness. Perfect day.

Curse because camera packed in bag, and bag in advance car. Dine at G.H.—lovely Arab architecture with arched ceilings. 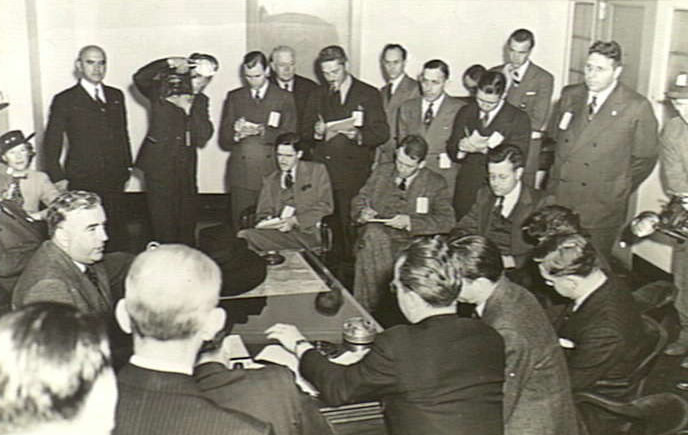 ...to the fleet, where I meet Admiral Cunningham—slim, red faced, blue eyed, radiating optimism, faith in his ships and his men. 6 This is the No 1 personality I have so far encountered on this journey: compared to him Chatfield 7 is a stuffed clothes man. Sad to see French warships in port—neat but useless.

Admiral Cunningham...is the No 1 personality I have so far encountered on this journey: compared to him Chatfield is a stuffed clothes man

Lunch with Bruce at Savoy. Dalton, H. Morrison, Bevin, Lord Woolton, Hankey, John Anderson, Lyttelton. 8 Very easy and informal, and if there was any ice to break I did not notice it.

Bruce thinks Woolton good, but as he is quiet and perhaps a little deaf I could not get a clear impression. He is the pure business man. Bevin is rotund, cheerful and self-confident, with an occasional dropped H. Plainly would be a great hand with a fractious union, but I would think of limited mental powers.

Herbert Morrison lacks one eye, but is rather arresting; smallish, humorous, broadminded, I feel I must get to know him, and I had an instinctive feeling that we would get on. Will be surprised if Lyttelton is of real tonnage.

Herbert Morrison lacks one eye, but is rather arresting; smallish, humorous, broadminded... 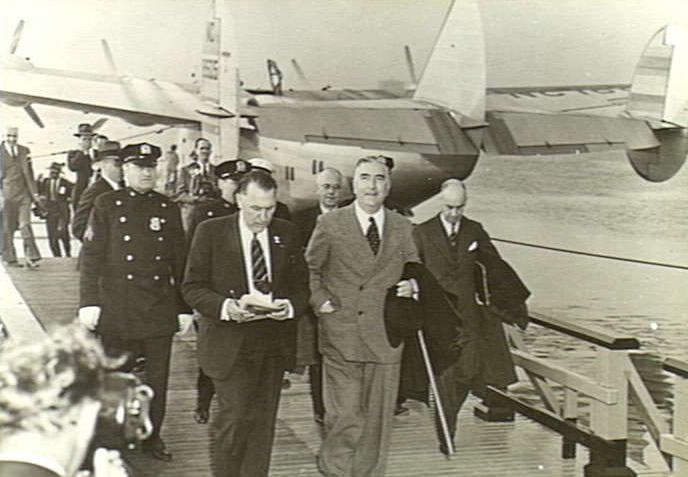 Bevin good, but some conservatives nervous about him. He has more force than Herbert Morrison, but perhaps less character, and a coarser fibre. John Anderson very solid.

Dine with Attlee 9 and Labour Ministers. Very interesting talk about Labour in Australia. Real answer—Irish. They all agree. Attlee, at close quarters, earnest, upright and intelligent. Labour party must have a theory to succeed. Importance of trained men in civil service. Folly of Australian Labour in resisting university graduates. My own philosophy.

Socialism cannot succeed on a doctrine of bread and circuses, but depends ultimately on a spiritual revolution... 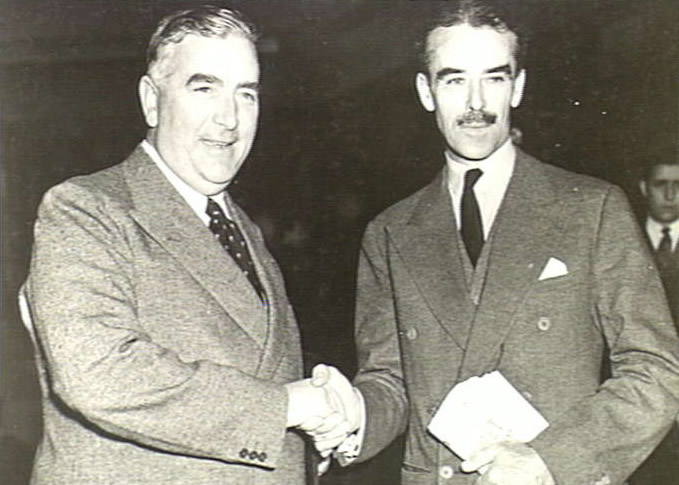 On arrival in New York, Menzies meets up with former Cabinet colleague and Australia’s representative in the United States, R. G. Casey.

Roosevelt is a little jealous of Winston’s place in the centre of the picture. I tell him they should have a meeting.

R. is not an organiser—very like Winston—and co-ordination of effort is not conspicuous.

Hull 12 is loquacious but very sound and clear-minded about the war—much clearer than many of the officers of his department. He, & all the leading ministers, are for war and nothing less. But the President, trained under Woodrow Wilson in the last war, waits for an incident, which would in one blow get the USA into war and get R. out of his foolish election pledges that “I will keep you out of war”.

Henry Wallace, Vice President, is a dreamer and a philosopher with a quiet and engaging personality, and a passion for throwing boomerangs!

The Casey’s are a very great success, but once more I am embarrassed.

Dick 13 asks for (a) the C.H. (b) a roving commission to cover U.K. and Middle East!!! He asks for each in Maie’s presence! He is the bitterest disappointment of my life. Is quite plainly on the make. Moral, in politics, trust nobody!

He is the bitterest disappointment of my life. Is quite plainly on the make. 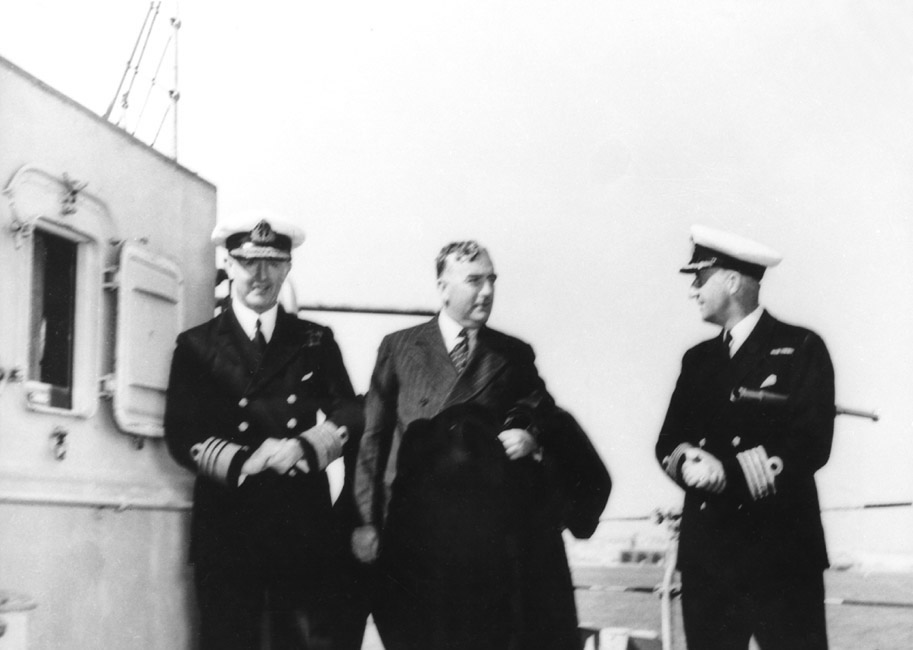