T he trip to Britain, via South East Asia and the Middle East, was Menzies’ first trip by air overseas, in an age when air travel was lengthy and often arduous. His diary contains many observations about the trip: impressions of the geography, experiences in various aircraft and of air travel.

Menzies and party left Sydney by flying boat on 24 January and returned to Australia on 24 May. In 4 months Menzies had travelled 36,000 miles by air and the travel to and from Britain had taken 34 days. During the trip he delivered over 90 speeches, attended War Cabinet, met officials at all stops and brought back official papers weighing 230 pounds. 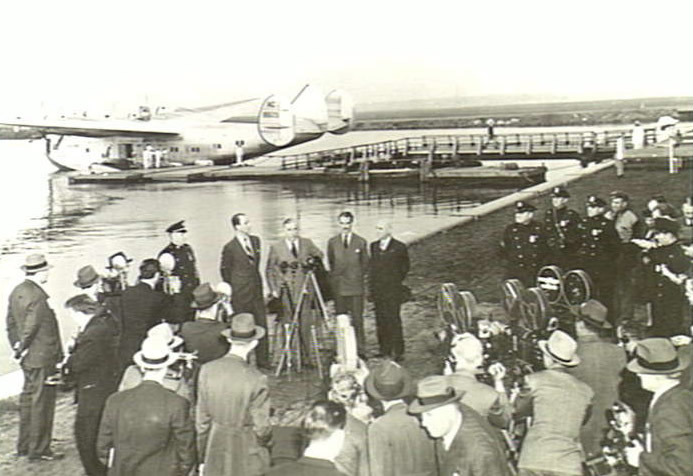 Leave Sydney. Qantas Empire Flying Boat CORINNA 1 Capt. R.S. Adair. The aircraft so streamlined that looked at from the rear it looks positively herring-gutted, but from inside it is most roomy—comfortable seats in which you may snooze not only post-prandially but all day.

Chief feature in the air—press the button and the steward arrives with the drinks—the Company’s compliments in our case. Shedden 2 and I, each of whom had dived into his pockets for cash, smile with genuine Scottish pleasure.

Domestic note. Silk shirts are hopeless for the tropics. They are wet through in 5 minutes, and flap greasily on you for the rest of the day. This morning I put on my short sleeved aertex cotton shirt—an immense improvement, don’t need to wear a singlet.

Across the peninsula to Karumba, at the mouth of the Norman River. The country-side green and wet—a great rain has just fallen. Shores of Gulf of Carpentaria not well defined, but fade out into the sea by a series of swamps and marshes. 3

Domestic note. Silk shirts are hopeless for the tropics. 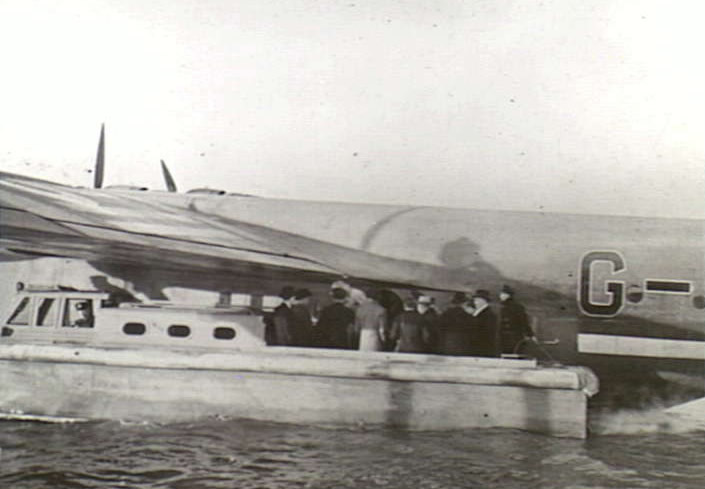 Menzies alights from his plane at El Adam during a tour of the Western Desert. Photographer – Damien Parer.

At dawn, off across the Timor Sea—500 miles. Cool enough for a lusty breakfast at 9,000ft. Curious how accustomed one becomes to flying over vast stretches of land and water. Australia is behind and the great adventure has begun.

A long and rough day’s flying; head winds keeping us low for most of journey. On whole, disappointed with flying comfort, a slight feeling of squeamishness is always present somewhere in the stomach.

We circle around Bardia twice—the sea brilliantly blue green and the land an orange yellow-quite superb from the air. As we fly over this barren country—completely bare rocky gravelly soil—we see occasionally the brown outline of some plot cultivated hastily by some Bedouins after a rain. Here also one sees occasionally the round brown mound which marks some old Roman cistern, used for water or grain storage underground. Shades of “Beau Geste”. 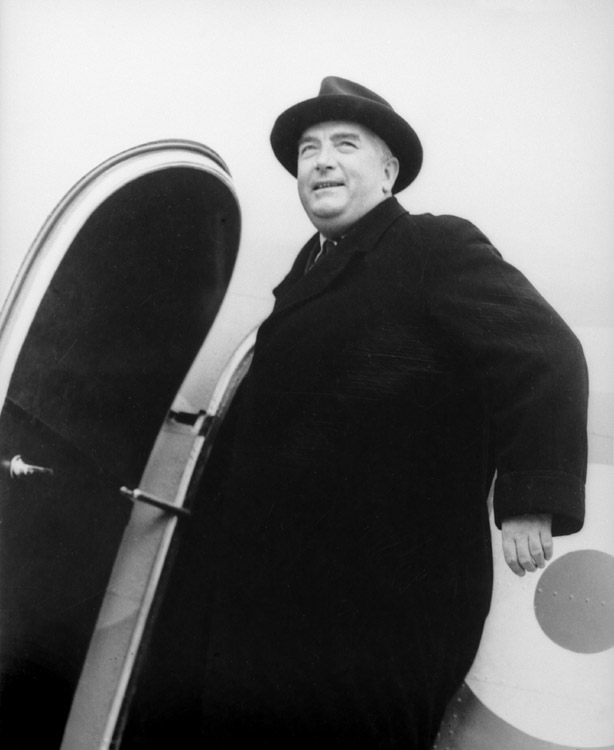 Menzies (second from right) in the launch coming ashore from a flying boat. Photo taken in England, 1941.

Approaching England, we fly low. There is a tension in the nerves, a feeling of “running the gauntlet”. We'll all be happy to arrive. Flying very low-under the clouds. A very unpleasant finale to our voyage. Zig-zag. We are now travelling, by the sun, S.E.! 250 miles off land, we are picked up by an escort of a Blenheim and a Beaufort; it makes you feel a little better.

Off Mundy Island it begins to snow! And two days ago we were at Lagos. This air travelling requires the constitution of a horse.

Approaching England, we fly low. There is a tension in the nerves, a feeling of "running the gauntlet".

Call at Horta, in Azores. Damp, mountainous, blotches on walls, and a long-anchored German ship in harbour. Portugese. We ought to take these islands before the Germans do.

...a long-anchored German ship in harbour...We ought to take these islands before the Germans do.

Off on overnight hop from San Pedro to Honolulu—2600 miles. A smooth journey and early arrival among the warships at Pearl Harbour. Then to Royal Hawaiian. Riot of colour. Waikiki Beach very colourful, and good crowd (including many white-clad sailors) though it is between seasons.

Put in busy day dictating stuff to a borrowed stenographer. Tomorrow early to Canton Island, on the Equator, where I shall imitate a Porterhouse steak.

A sweaty night, but made tolerable that 10,000 feet up in the air (as I discovered today crossing the Equator) it can be and is most pleasantly cold. Indeed, flying today I did hours of writing and preparation for my Australian landfall.